A Musical, Some Tonsils, and Thanksgiving

Those three topics seem to pair well enough together, don't they? 🤷🏼‍♀️
Penny's theater teacher is quite good at what he does. I think he even received some Utah Teacher of the Year award a year or so ago. So it's great she and Goldie have been able to be a part of his productions. ... On the other hand, you don't put together amazing productions by demanding relatively little of your cast. And at times I have more than wished for a shoddier production and a child more at home! That's just during rehearsals of course. Once I get to see the play itself, I'm always happy one of my kids got to be a part of it. And of course the potato fundraiser is a big plus in my book. (Which is not typically something I would say about a fundraiser. But potatoes and gravy are a Sunday staple at our house. And I like nothing more than having several of those enormous bags of very large potatoes in our basement food storage room!)
With all of that said, I present you Penny in The Pirates of Penzance. (Oh that modern Major-General is a fun character.): 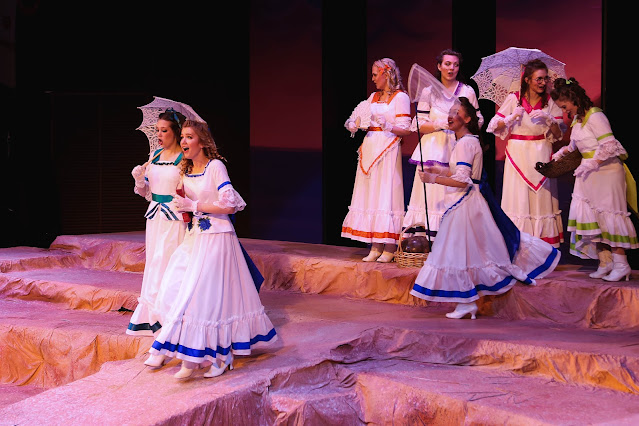 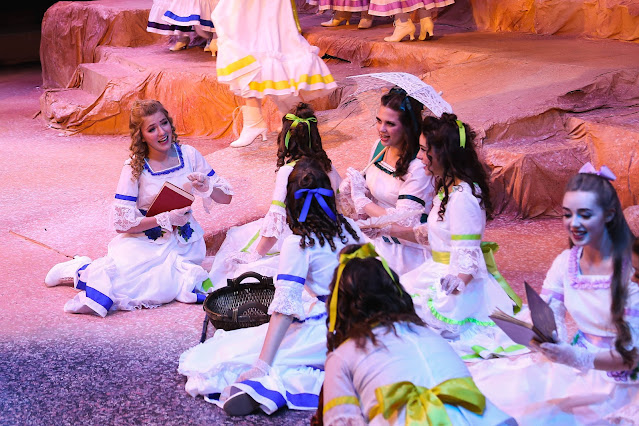 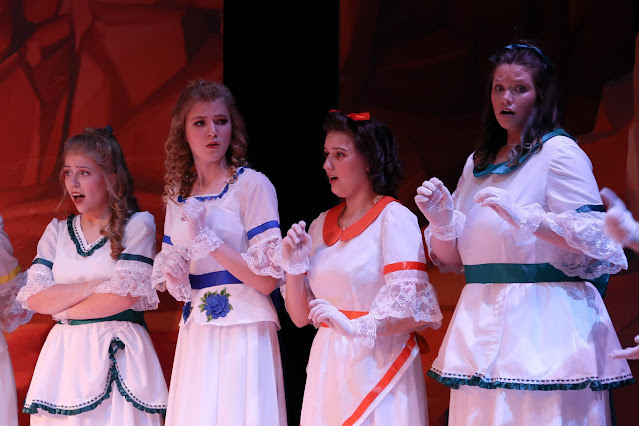 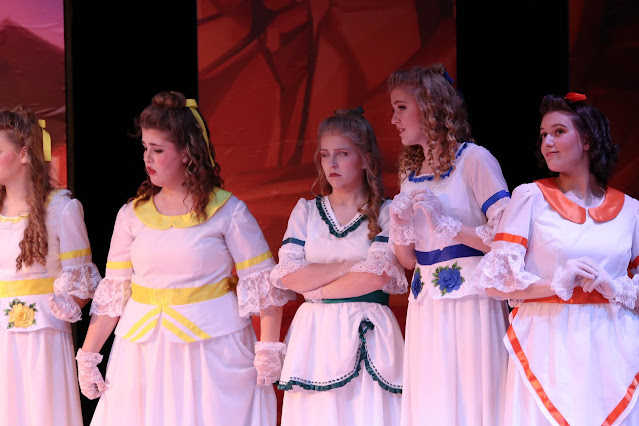 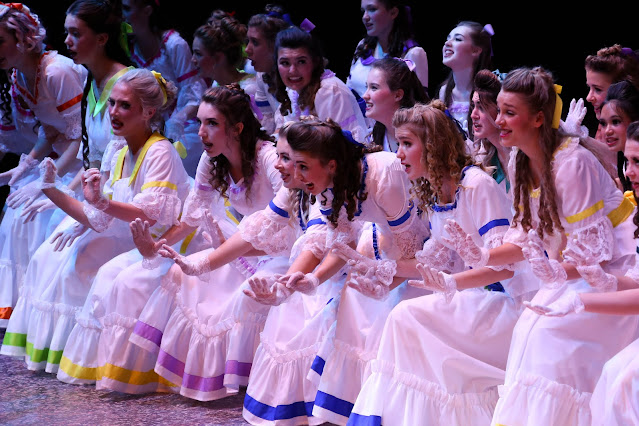 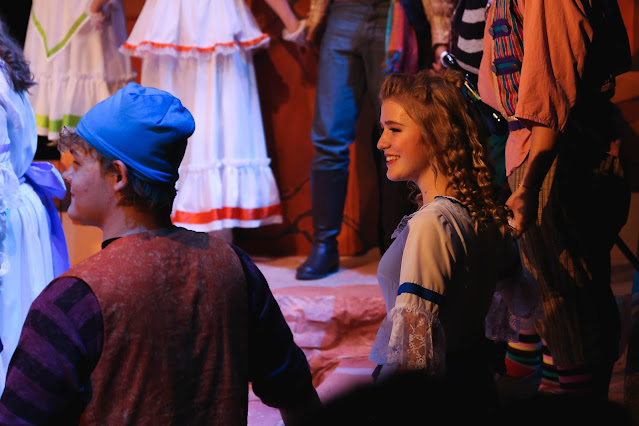 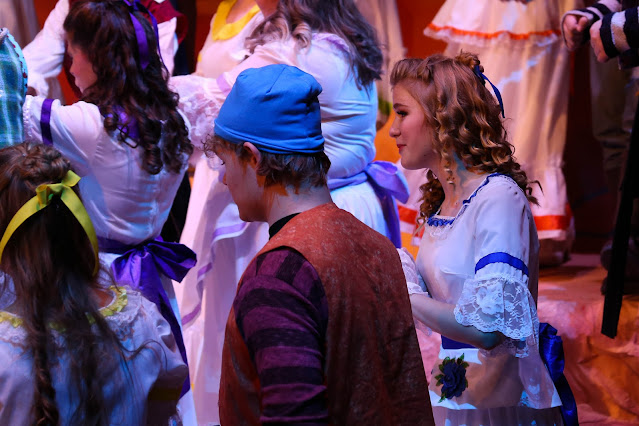 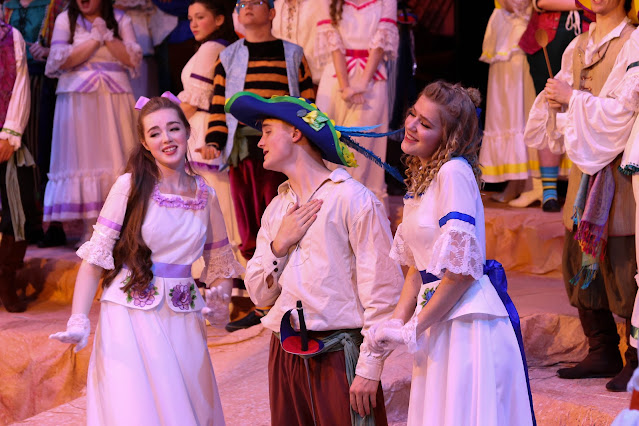 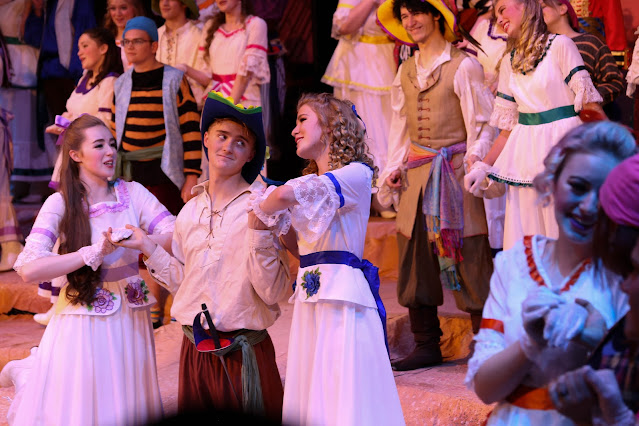 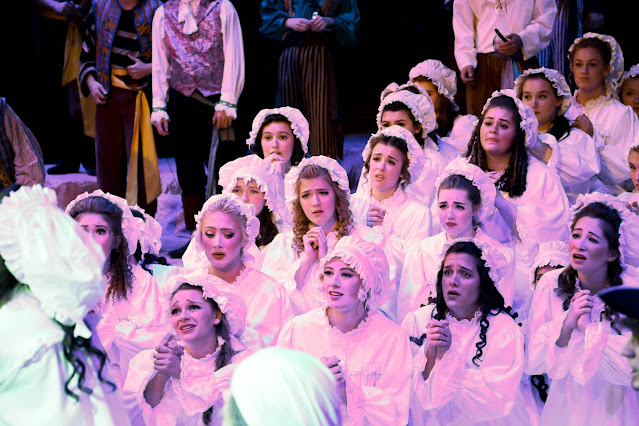 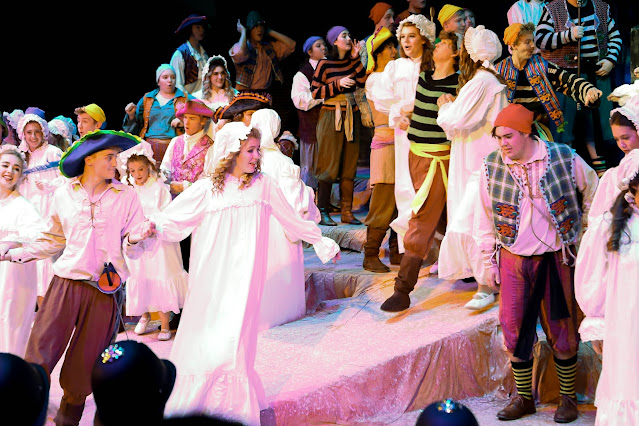 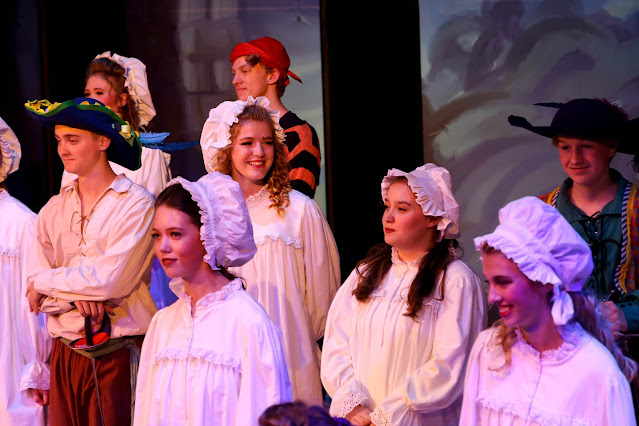 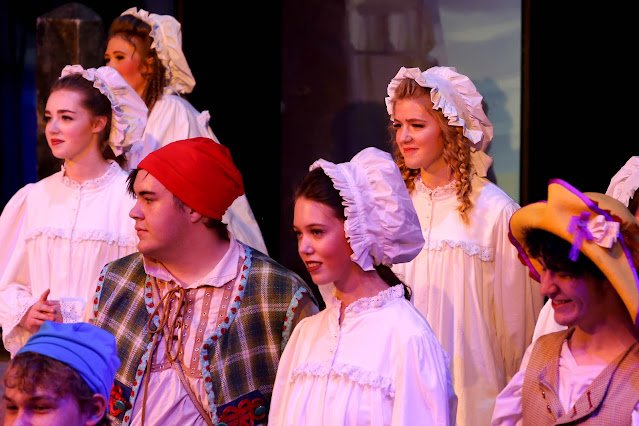 And tonsils. The last time we had tonsils out in our family was in 2005 when Mike was in Georgia and little Daisy was three and snoring and gasping so much in sleep from her enlarged tonsils and adenoids that I truly feared she was being deprived of oxygen. But then we had 17 years of never even considering such a surgery again. Which is why it is rather surprising that we've had two tonsil/adenoidectomies in our family since August!
Mette had hers out the Friday before Thanksgiving. And I must say that I am glad to be on the other side of recovery. (Oh she's not fully healed up yet, but back to feeling mostly fine.) 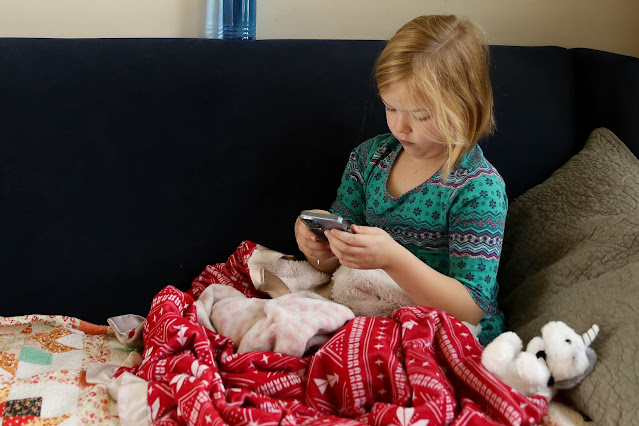 Hans had given her the full rundown. And it's a good thing they let her choose a stuffed animal before surgery too because she was counting on it and would have been enormously let down had it not happened!
Poor love post surgery.
Everyone was so sweet to her. Daisy was away at college, but had frozen yogurt with all kinds of fun toppings delivered. Goldie brought her new earrings when she came home the following weekend. Gayle brought her some cozy pajamas. Our neighbors and also my ministering sister brought her popsicles.
Still, for all of that, and all of the popsicles, etc. we promised and gave ... it still feels like you mostly just duped them when they discover that "all the ice cream you can handle" is not really that fun when you feel miserable. :(

And Thanksgiving! We had Mette recovering from her surgery, and some illness from other kids early in the week, so I was worried Thanksgiving wouldn't pan out. But it turned out happily. (Though Starling did come home after my mom's and immediately threw up. Eek. So hopefully we didn't pass anything along!)
I wish I'd taken pictures of Wednesday night's pie making! The girls made so many! Probably our most yet! But we wanted plenty to take to my mom's and afterwards to the Harris's. If I haven't forgotten any, Daisy made six (including the traditional Harris huckleberry pie--which she's gotten quite good at), Goldie made three, I made two, and Penny made three! We were up quite late baking and washing dishes. But it's so fun that this thing I used to do with my sisters (we would all gather at Kathy's house to make pies the night before Thanksgiving), I now get to experience with my own girls. Sadly I only took this one snapshot when the whole business was finished and these last few pies were cooling on the oven:
We joined three of my siblings (Chris, Shannon and Megan) and their families at my mom's for dinner. Everyone brought amazing food and lots of it. I didn't get many pictures and am missing many of us (most of Megan's family arrived just as I was putting my camera away), but here are a few. And it makes me happy just seeing all the warm, traditional, familiar scenes from my parents' house in these pictures: 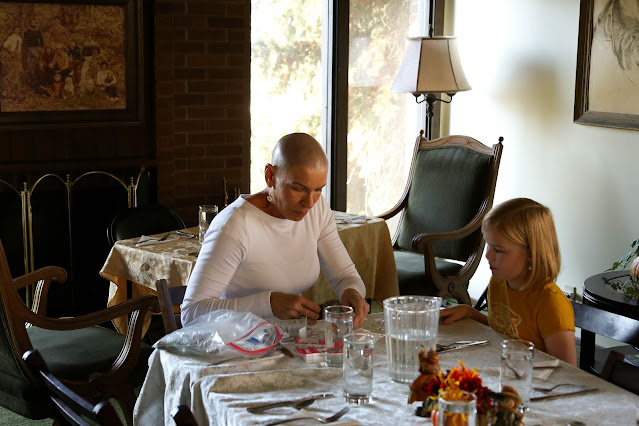 Shan brought some little stick on nails to put on my younger girls. They thought it was so fun. 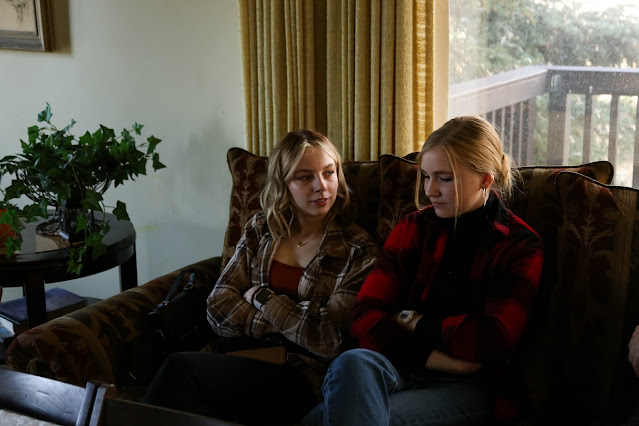 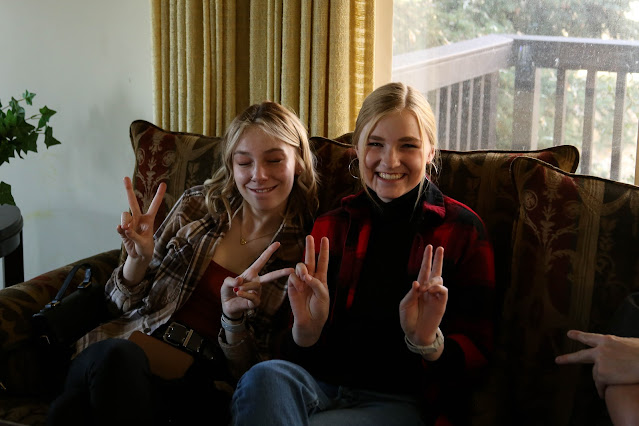 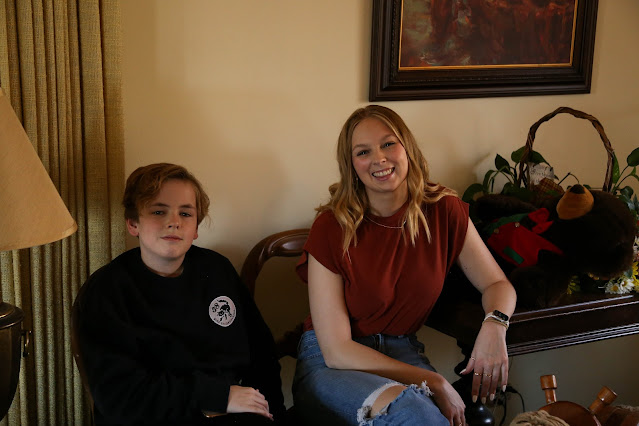 Shannon's Andre, along with Abe and Connor (Megan’s oldest) talking with Chris. This is the first activity Andre has been to with all of his family in over a year, so it made us all happy to get hugs from him and hear his laughter. 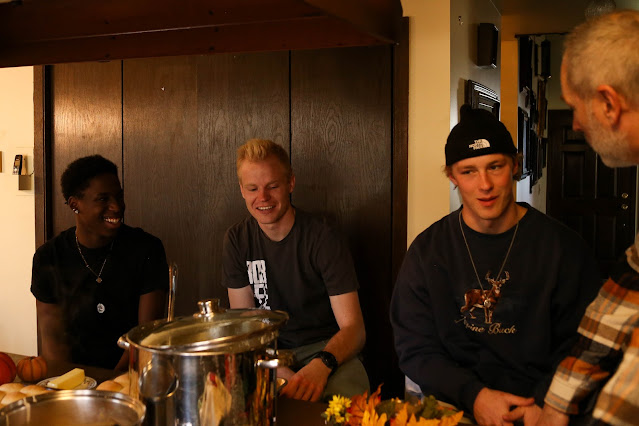 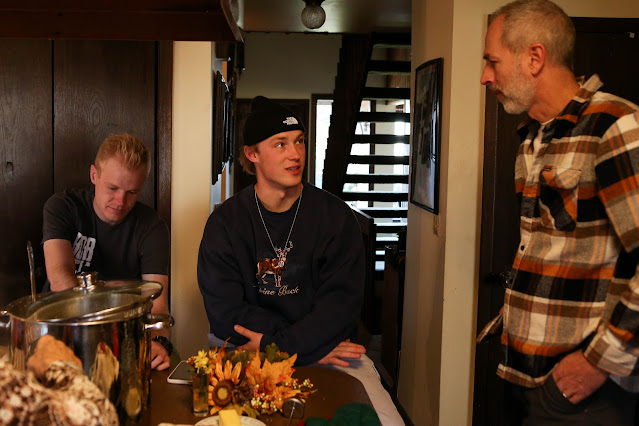 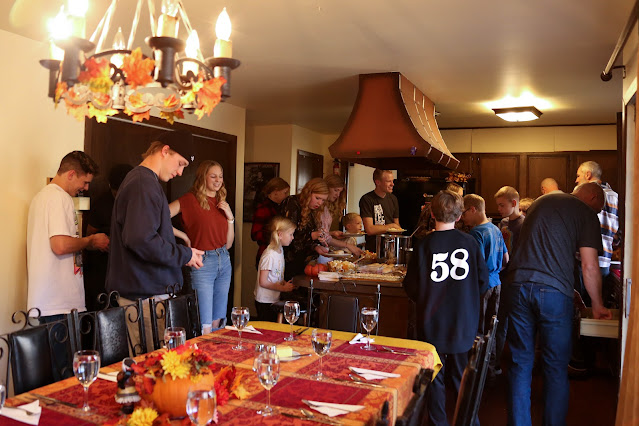 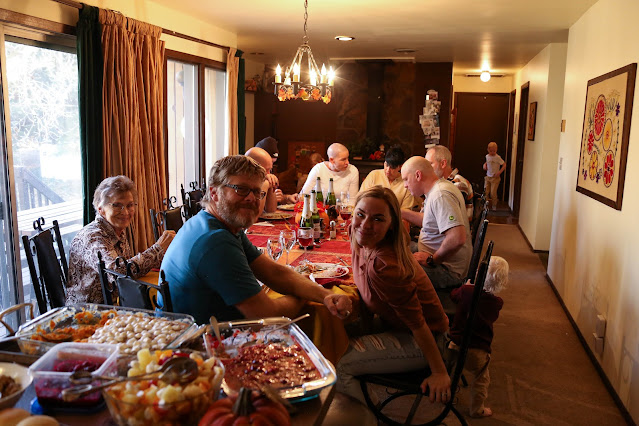 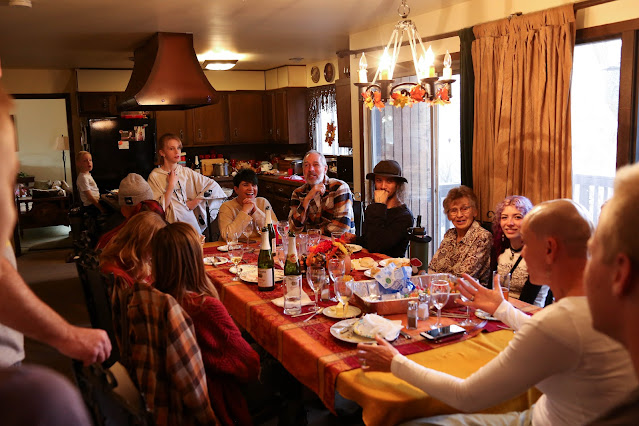 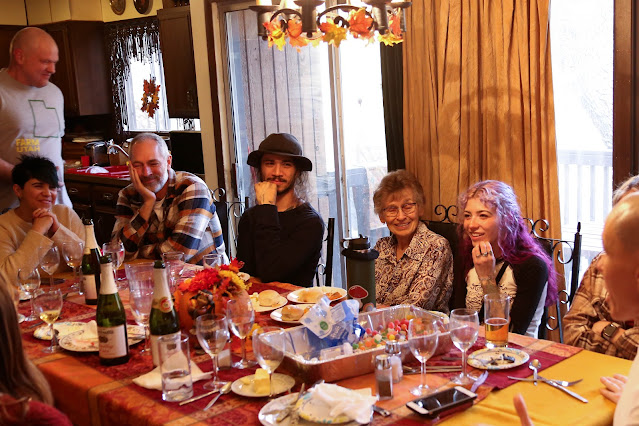 There are usually so many people at my mom's dinners that we are scattered all over the house. But this time the group was small enough (ha--relatively speaking) that even though we ate at several tables, most of the older family members all fit around the kitchen table for visiting after dinner. 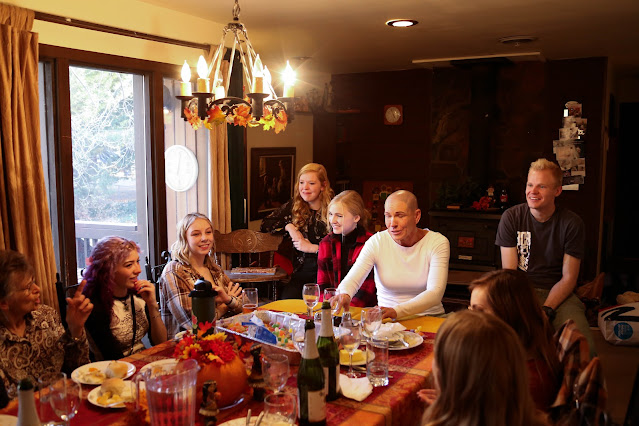 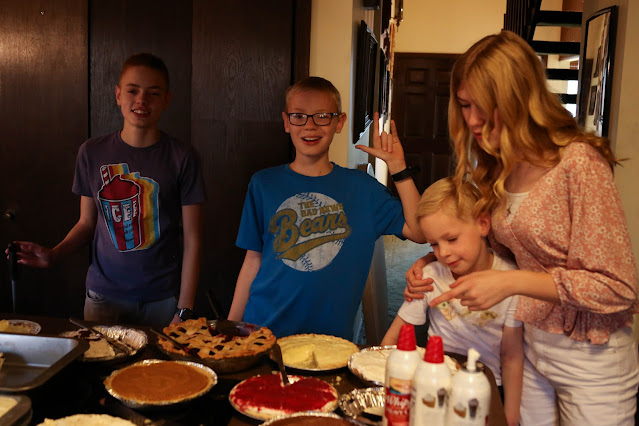 After my mom's, I took Starling home (I didn't yet know she was sick, I just knew she was incredibly grumpy and could handle no more family fun) while Mike and the rest of the kids stopped by his family's Thanksgiving party in a ward gym. I wish I'd been there to get pictures. It sounds like they had a lot of fun doing talent shows and playing games.
Afterwards, fairly warned of Starling's state, Devin and Melissa came over to visit till late with darling little Stella.
It was a very full day and a very happy Thanksgiving. In fact the only thing missing was a Thanksgiving morning run (my achilles tendon has been in a very bad state for months).
The End. :)
Posted by Nancy at 12:36 PM

Oh my goodness. HOW MANY daughters does that modern-major general have? Dozens of them?! They are absolutely darling, and I love their dresses, but Penny really is the cutest one of the whole bunch!

The other night the winds never did make it this far, but the night wasn’t completely still and peaceful either. There were disturbances fro... 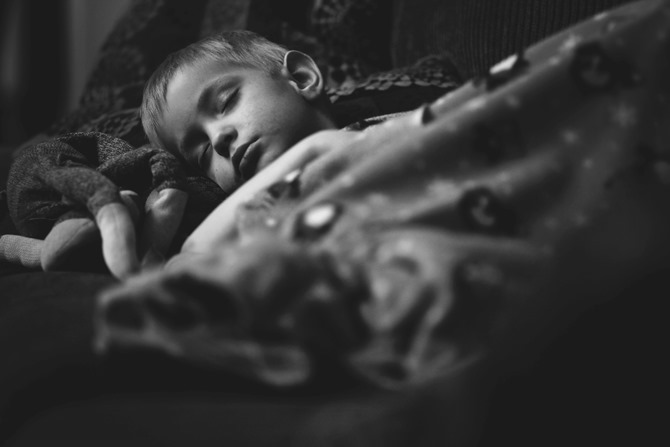 Nancy
I was a Zoology major in college -- TAing classes, teaching anatomy labs, etc. I find human physiology to be the most fascinating thing, however, prior to my scientific college days, I was all about drawing and writing -- taking art and creative writing classes through all of high school. Now I'm a stay at home mom to ten (an opportunity I am extremely grateful for and quite adore). I seem to have lost all my previous knowledge and skills, which I don't really mind as I take care of my little home (except for the occasional a-man-was-given-a-talent-and-buried-it-in-the-earth guilt). Still, something in me is forever wanting to write little bits of things -- hence this blog.

Partly because chickens really have lived in my window well. (And on more than one occasion! . . . They are forever wanting to live in the window well). But mostly because, the first time I blogged about a chicken in the window well, it occurred to me that I had discovered a much better blog name than the boring old "Nancy's Thoughts" that I'd spent the previous two years blogging under. So, "A Chicken in the Window Well" it became. If you want to read more about this chicken nonsense, just click on the "chickens" topic below.

My posts by topic